Pre-financial crisis subprime RMBS litigation may be entering a new phase, moving on from fraud and repurchase actions brought by investors against sponsors and sellers to new actions by deal participants to recoup litigation losses from one another. The Credit Chronometer identifies litigation trends and the merits of potential claims.

After a long dormancy, subprime RMBS has made a comeback. The Credit Chronometer is on the lookout for history repeating itself and identifies best practices to avoid issues of the past.

Joseph Cioffi is a partner at Davis+Gilbert in New York City where he is Chair of the Insolvency + Finance Practice Group, a multidisciplinary practice spanning corporate, insolvency and litigation. He has a unique perspective afforded by his experience in all stages of credit and market cycles, including in subprime lending investments, operations and litigation. Joseph and his group have been deeply involved in disputes and litigation resulting from the last financial crisis. He has written for or has been quoted by numerous publications, including American Banker, Asset Backed Alert, Asset Securitization Report, Auto Finance News, The Banking Law Journal, Consumer Financial Services Law Report, Financial Times, GlobalCapital, The Journal of Bankruptcy Law, Non-Prime Times, NPR, Structured Credit Investor and Westlaw Journal Automotive regarding auto loans, student loans, marketplace lending, subprime residential mortgage-backed securities (RMBS) and environmental, social and governance (ESG) investing.
View Full Bio

Listen to a recent Auto Remarketing Podcast to hear Joseph Cioffi discuss where risk is now percolating and how finance companies are handling it.

ABOUT THE INSOLVENCY + FINANCE GROUP

Davis+Gilbert’s Insolvency + Finance Practice Group represents clients in a broad range of corporate, insolvency and litigation matters. The group has been actively involved in many of the most notable and highly visible business events in recent years related to the last economic downturn and has vast experience in the area of subprime lending, including the operation of origination platforms, relationships with servicers and defending large-scale asset-backed securities litigation. The broad and diverse experience of their attorneys makes them particularly well-equipped to advise clients in rapidly evolving markets, such as, those for auto loans, student loans, marketplace lending, mortgage loans and environmental, social and governance (ESG) investing.  Additional highlights of the practice include the following:

Bankruptcy: The group guides clients through financially distressed situations and helps formulate and execute creditor enforcement strategies, in particular, in the case of intermediaries facing obligations to third parties. The group has defended nearly $1 billion in fraudulent transfer claims brought by the trustee for the liquidation of Bernard L. Madoff Investment Securities LLC.

Valuation is the foundation of a successful CMBS deal and key to setting expectations, from cash flow to recovery. It should take paramount importance in times of economic flux because when, as now, there is uncertainty and the potential for losses, it is the area where deal parties may be most vulnerable to legal claims by investors, including ones related to special servicing practices, net operating income (NOI) and property appraisals.

In fact, valuation issues have already become the center of litigation and are impacting the ability to refinance in a rising interest rate environment.

There is a looming wave of $97 billion in CMBS conduit loans maturing in the next 36 months, with $33 billion coming due within the next 18 months. It’s a smaller wave than the great “Wall of Maturities” from five years ago, but as I discussed with Wealth Management Real Estate recently, it could have a disproportionate impact given rising interest rates and the likely increased costs and, at its core, it can create valuation uncertainty.

CMBS’s response to rising interest rates can be a bellwether for the economy given cash flows are indicative of the health of so many sectors of the economy, from retail to industrial. So far, interest rate volatility has introduced further uncertainty to the shifting sands of a post-pandemic economy, and by extension, the secondary market. As I indicated in a recent interview in Commercial Property Executive, the uncertainty for both lenders and borrowers is reflected in widening credit spreads and the sharp drop in new issuances in June and July (since the war in Ukraine started), after a good start to the year. 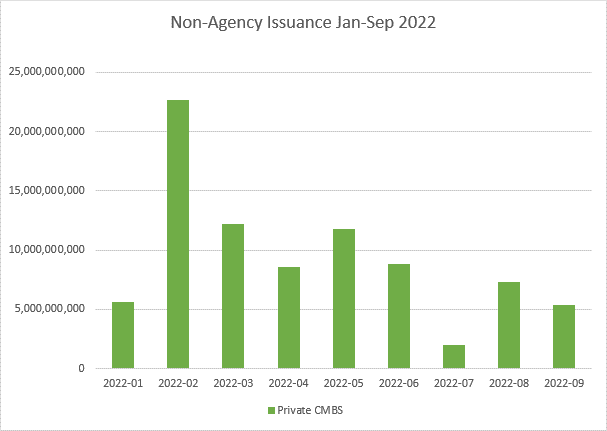 For the most part, there has been steady improvement in delinquencies since pre-pandemic peaks, but when it comes to interest rates, there is a tipping point when too high becomes too much and negatively affects property values and underlying credit performance. For maturing conduit loans averaging 4-5% capitalization rate, analyses have shown a good portion of them being able to maintain an acceptable debt service coverage ratio (DSCR) and obtain refinancing at 6-7%. At higher levels, there is a greater chance that more expensive additional layers of debt will be needed.

Eyes on Office and Retail

Across sectors, there will be refinancing challenges for properties with already low NOI relative to existing debt. Not only are they maturing into a higher rate environment, but other costs are going up as well, including the cost of interest rate cap insurance and maintenance.

According to DBRS, by sector, retail and office comprise the largest portion of loans maturing in 2022-2023. These sectors have been tested and strained by Covid. If there is a recession, as some have predicted by end of 2023, then aside from higher interest rates, valuations can shift, dropping NOI below desired or viable levels for refinancing.

Particularly in the office sector, remote and hybrid work and the success of employers’ return to office plans will impact whether refinancing or extension is available for a given property and impact valuation. Potential changes in office use would exacerbate excess supply issues generally, but disproportionately impact older buildings, which could find it even more challenging to refinance. Manny Malbari, Structured Finance Practice Co-Leader, Valuation Advisory at Stout, notes a good example of this is “NYC where tenants are signing new leases with a smaller footprint in new buildings with better amenities than their existing space to attract and retain talent.”

Challenges are compounded by the fact that lease agreements on some 900 million square feet of office space in the US are set to expire by 2025, which could result in a significant loss in value over a number of years.

Retail is subject to further distress given inflation, supply shortages and changing consumer preferences and will not stabilize all that quickly.

Special servicing of distressed loans can make or break distressed CMBS deals. Gunes Kulaligil, Structured Finance Practice Co-Leader, Valuation Advisory at Stout points out that “the goal should be to maximize the value to the trust as a whole. Both the dollar amount and the timing of recoveries matter if the disposition route is chosen. However, various types of modifications may provide more value than property disposition.”

Whichever resolution is chosen, it will be important to show this was the “best” outcome for the trust. “The issue, of course is, different parts of the capital structure will end up better-off or worse-off depending on how much of it is received, when and what it is called based on the underlying agreements,” warns Kulaligil. To complicate matters, sometimes servicer and junior bond holders may be affiliated or even the same entity “further highlighting the importance of providing a clear rationale and the NPV analysis for any resolution strategy,” Kulaligil suggests.

To Kulaligil’s point, Icahn Partners v. Rialto Capital Advisors, LLC is a 2022 Nevada state court dispute between certificateholders and a special servicer over an outlet mall property demonstrating the critical role of valuation and its impact on legal exposure.

The complaint describes the underlying agreement as having a control-shifting mechanism whereby the first-loss Class E certificateholders with more than 25% certificate balance outstanding assume control once implied losses are ascertained. This is rooted in the principle that the most exposed certificateholders should have control of what happens to the property backing the certificates.

While the case is in its early stage, with a pending motion to dismiss, it’s a scenario that shows the changing fortunes of one deal based on a valuation as interpreted under the contract.

Valuation will be a paramount consideration given the turbulence in the market, especially in the office sector. If performance does weaken and there are battles over loss allocation, valuation disputes are likely to be at the center. Market uncertainty and losses may seed fertile ground for disputes over projected NOI and occupancy levels, and the role of valuation in setting key loan ratios such as DSCR and loan-to-value.

Sign up to receive ongoing updates from Credit Chronometer
You can unsubscribe at any time.